This week, our Associate Director, Cherie Whiteman, attended the first day of the LARAC conference in Nottingham. Incredibly well-attended with in excess of 400 delegates over the two days, this conference is the highlight of the municipal waste manager’s calendar. Old contacts met new, lessons learned were passed on and viewpoints were aired.

The session kicked off with eloquent presentations and dry humour from Mary Creagh MP and Chair of the Environmental Audit Commission, Chris Preston from Defra, and entrepreneur Brendan Fatchett. There was much discussion on the forthcoming Resources and Waste Strategy, which has been promised by the end of the calendar year, also with the assurance that it won’t be buried in the pre-Christmas 20th December deluge of documents from Government. Little could be said on the content of the Strategy, other than that the PRN system will be reformed, DRS will be consulted on and single use bans are being looked at for things that do not fit into producer responsibility – we continue to watch and wait….

Lessons learned in establishing effective communications campaigns were presented by Costa Coffee, Hubbub and South Staffordshire DC. The consensus view was that simple is best, make it relevant and bring out the humour. Excellent innovative examples of successful campaigns were presented by Stine Wilhelmson from Hubbub, reinforced on a local level with tongue-in-cheek humour from Dan Roberts - Cherie is now thinking of moving to South Staffordshire because the ‘Festive Bin Men of Christmas’ campaign sounds like fun. We expect the crews loved dressing up for their photo shoots!

The post-lunch panel discussion on why recycling rates have fallen and what we can do about it focused primarily around ‘on the go’ recycling and the challenges local authorities face in implementing and operating such schemes. High levels of contamination and lack of participation were considered to be partly to blame in all collection schemes, largely due to confusion and apathy of the public, coupled with lack of consistency in approaches across the UK.

Contamination featured again, with a case study on nappies from Sarah Forgione from NLWA and Stephen Baker from Keep Britain Tidy. NWLA had high levels of contamination in recycling, with dirty nappies being the prime culprit. Research by KBT revealed that those making such dirty choices were apparently unaware that nappies could not be recycled! Shockingly, this is not helped by one of the major brands of disposables, having a ‘recyclable’ logo on the packaging…

The final slot was presented by Julie Lewis from Daventry DC, a previous client of FRM. Full respect to Julie and her team, for implementing a significant service change with very little in-house expertise, and very little disruption to the public. This year saw Daventry move from an out-sourced collection to a joint venture arrangement with Norse, complete with a change from kerbside sort to fully co-mingled, a new depot and new IT. No mean feat, and certainly no job for the faint-hearted, although Julie did confess to taking full responsibility for increased chocolate sales!

All in all, it was an interesting and informative event that FRM is considering supporting in the future. The afternoon cakes were also particularly tasty… 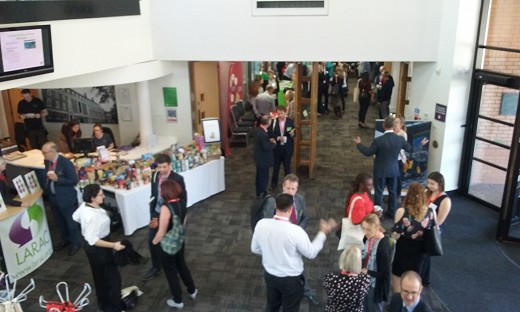 Networking at the conference