A Good Year for the Roses?
Key capabilities
Further services:

1981 saw Elvis Costello release his version of the song a “Good Year For The Roses” reaching number six in the UK charts.

Fast-forward 39 years to 2020 and the Covid 19 pandemic. The UK has experienced a warm spring and pleasant summer with some surprisingly hot days interspersed with some heavy downpours. This has meant that the UK has seen a proliferation of growth, not only of roses, but vegetation of all sorts. This includes weeds on footways and carriageways. Additionally, we have seen the appearance of some novel non-native species on our streets, more of which, later.

Weeds such as: Dandelion (Taxacum officianale), Dock (Rumex obtusifolius) Groundsel (Senecio vulgaris) and many other species have spread quickly on footways and channels as a result of the favourable weather conditions. The situation has been considerably worsened by the hiatus in normal street cleansing procedures brought about by the Covid 19 pandemic and the need to realign the duties of the street cleansing workforce.

Covid restrictions have meant that very many more of the general public have remained at home who would otherwise have travelled to work by their cars. The presence of parked vehicles including both on the carriageway and on the footway during the daytime has meant that street cleansing has been almost impossible in many locations, especially in urban areas. The lack of regular street cleansing during this period has meant that weed species have seeded, germinated and thence proliferated. Furthermore, the obstructions to the footway and channels caused by parked vehicles has meant that treatment by chemical control (weed spraying) of these areas has not been possible in most cases.

Weed growth in the Highway: 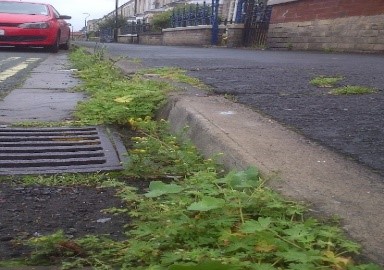 The inevitable consequence of this coalition of events has been the proliferation of all sorts of vegetation on the highway, causing obstruction to users, conveying an air of neglect and in some cases damaging the fabric of the highway.

Another non-native species that has seen a massive proliferation this summer is the promptu faciem larva or as its better known by its common name the “disposable face mask.” These items, wilfully dropped as litter, can be seen outside of shops, bus and rail terminals and anywhere else where the requirement to wear a mask is relaxed upon ones exit. This species appeared from spring 2020 onwards as a new form of litter and can most definitely be described as an invasive species!

These masks are unsightly, present a potential danger to wildlife and given their association with disease may have an underlying psychological effect on some members of the public. Worse still, as a composite, multi-material product it will not readily bio-degrade and once deposited it is going to remain in-situ a long time unless someone (i.e. someone else) physically removes it. 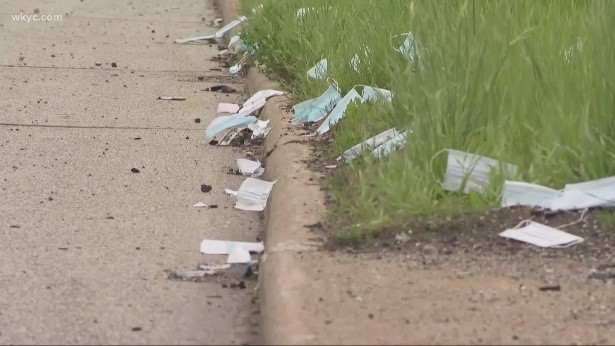 With the Chelsea flower show and other horticultural shows cancelled in 2020, this year’s burst of colour in many areas has come from the vibrant multi-species of weeds (many shades of green) interspersed with the various tints of blue of discarded face masks littering our streets.

A glint of silver?

Another addition to the interesting street-scape of the UK in the summer of 2020 is the proliferation of discarded small, shiny metal canisters. These can be seen in streets, public open spaces and on adjacent private land in great numbers. The more genteel amongst us may have thought that making one’s own soda-stream drinks seems to have become incredibly popular this year. Unfortunately, this is not the explanation.

These canisters have contained nitrous oxide (commonly known as laughing gas). Nitrous oxide is an increasingly popular recreational drug (which is inhaled by the user) and is now believed to be the fourth most commonly used recreational drug in the UK. The partial relaxation of the earlier very strict controls (“Stay at Home”) at various times during the Covid 19 pandemic has seen very large increases in party goers at ad-hoc open-air gatherings and the subsequent appearance of post-use, shiny nitrous oxide canisters.

The canisters in conjunction with other paraphernalia (usually latex balloons) are discarded in massive quantities as litter, thus generating a further cleansing problem. It all adds to an increasing street cleansing burden for those charged with the responsibility of maintaining a clean area. 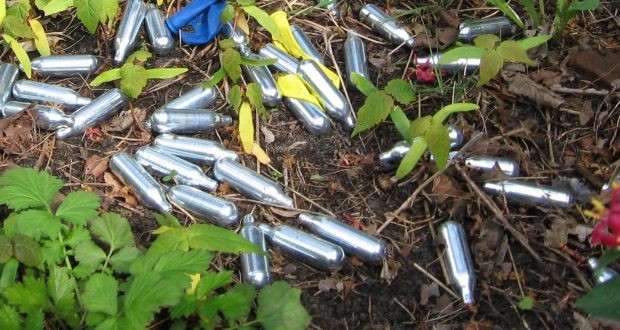 So, while back in 1981 Elvis Costello sang of a “Good Year For The Roses”, it seems that 2020 is going to need an Oliver’s Army to catch-up on the backlog of street cleansing problems.