Last week I attended the WEEE (Waste Electrical & Electronic Equipment) conference hosted by Let’s Recycle in London. It was an informative day, 10 presentations, a panel discussion and a number of Q & A sessions in-between providing an insight into the future of WEEE, issues facing the industry and thoughts around how to increase collections to meet targets.

• WEEE is the fastest growing waste stream in the EU

• Key Defra priorities for 2019 include;

Historically, the UK have always been able to hit the EU targets, however this year may be the first-year targets are not met which is a similar case to other EU countries. Defra has set an overall collection target of 550,577 tonnes for 2019, which is around 12% higher than the total amount of household WEEE collected and reported by compliance schemes in 2018.

Part of the response to the first priority above, and to increase the capture of WEEE, is to encourage the public to segregate this waste stream. Emma Williams, Marketing & Campaigns Manager at Bristol Waste Company, provided an insight into their playful behaviour change campaign to highlight collection of WEEE items from the kerbside. The campaign is being rolled out in two phases, the first phase is focused on engaging crew members and the second phase will be rolled out to residents during the early part of next year. Similar to their other comms campaigns, the WEEE campaign titled ‘Taking the WEEE’ is very colourful, those WEEE items which can be collected at the kerbside are highlighted in yellow and those which can’t are in red. Crew members were provided with additional training, the comms team displayed a variety of yellow painted WEEE items which were able to be collected from the kerbside in the cab of the RCV’s for a constant reminder. At the depot a large figure was created whereby a person is ‘urinating’ WEEE items into a container, clearly displaying where crew members had to deposit the WEEE waste collected at the kerbside during unloading. The staff rooms contained large signs with the campaign slogan, continually engaging and reminding the crew.

The campaign has been extremely successful so far, a 49% increase amongst the crew on knowing what WEEE waste is, and a 37% increase in the amount of WEEE waste captured compared to last year.

Comms is an extremely important part of a collection service, engaging both the crew and residents is vital to ensure the collection is efficient and working at its full potential. Bristol Waste Company have been extremely successful with their campaigns, with the use of humour, imagery and catchy slogans! 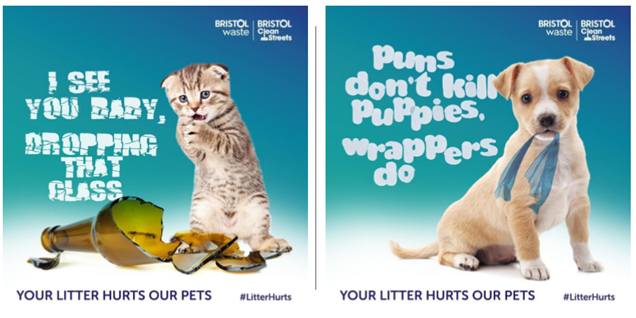 Hot off the press as I write, Pembrokeshire County Council have also recently released a musical parody of Elvis’s ‘The Wonder of You’ to promote the roll out of a fully kerbside sort system Worth a watch!