As major artists hit the headlines to raise awareness of the environmental burden associated with music tours, it seems that the climate agenda really is gaining momentum across all industries. Recently Coldplay announced that they would not be touring their new album on account of concerns over the environmental impact of their concerts.

“We’re taking time over the next year or two, to work out how our tour can not only be sustainable [but] how can it be actively beneficial” Chris Martin told the BBC

And it’s true. There is a significant carbon burden associated with seeing your favourite artists undertake a world tour. It could involve over 100 employees, multiple venues across different countries and numerous trucks moving equipment and flights to transport the artists. Not including the research from the Green Touring Network that suggests that fans travelling to and from shows contributes as much as one third of the carbon footprint of a tour. 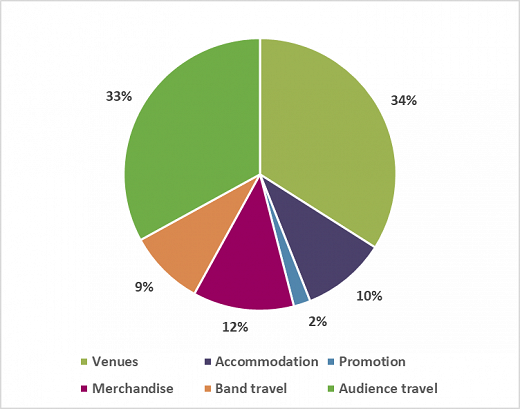 The carbon footprint of a music tour, Green Touring Network

Coldplay aren’t the only band getting behind the climate agenda. This summer, the 1975 collaborated with Greta Thunberg to provide backing music to one of her powerful speeches, and their record label has committed to donating £1 for every sold ticket to a not for profit tree planting organisation. Additionally, Billie Eilish has banned plastic straws from events, and announced an eco-village at each of her shows so fans can learn about climate change. Festivals like the Downs Festival in Bristol host talks and forums by Extinction Rebellion with a similar message.

Chris Martin says “we would be disappointed if [the next tour] is not carbon neutral”. So, what are the solutions? Smaller venues? Live streaming? There is no doubt that this is an honourable declaration, but is this fair for upcoming emerging artists that want to follow in the steps of Coldplay’s success? Their last tour made £523m and included glow sticks for a light display across the arena, which will have a big environmental impact.

Regardless, every little helps and bands such as Coldplay have a powerful platform to encourage change amongst their fans, sponsors and fellow artists. The reach with which they could spark conversation and ignite action, has to be a good thing. Behind the scenes the industry has been working to become more sustainable. Tour agent Emma Banks has been supporting musicians to recognise opportunities to reduce their environmental impact; aiming to strike the balance of what is realistic but also meaningful change. Innovation won’t happen without impetus and a supportive consumer, and one of the biggest bands in the world has sung out the refrain … will others join in the song?

So how does translate to you, or your business? Accountability and understanding are the first steps to making change. Once you acknowledge and understand the impact that different activities have on the environment, you can begin to make informed decisions on how this can be improved. It could be a simple as reviewing the energy efficiency of your building, procuring ancillary items from one local provider right through to a carbon assessment of your waste collection service.

The next step is to turn talking into action and see who follows suit. In this case the music loving consumers may well appreciate the message, and see whether innovation and a ‘ripple effect’ pervade the industry as a whole – in which case Coldplay will be seen as the leaders in their sector.