What is the priority for the next generation of ‘waste managers’?
Key capabilities
Further services:

The role of the ‘waste manager’, in some ways, has always been the same, and in others has fluctuated over time. The common role ever since the inception of organised storage and collections in the 1800’s, is for the safe removal of waste from producers (households and businesses), to protect public health and amenity. Some aspects of the role have changed over time as discussed below, for example during the first and second world wars due to severe resource shortages and needs, the Government Ministry of Salvage required the implementation of metal and paper collections, and the collection of food waste via ‘pig bins’ to use food waste (boiled as pig feed pudding) to maintain livestock and help deliver sustenance to the population. It was a collective effort to maintain supply of resources back into the threatened society and economy.

Through the 60’s and 70’s solid fuel heating gave way to central heating via the gas grid, and consequently the heavy ash content of the ‘dust bin’ dropped away, but was replaced by a growing amount of packaging as consumer habits, supermarket shopping and a growth in plastics created more voluminous wastes of more diverse character. This continued through the 80’s and 90’s including more prevalent use of disposable items (nappies, plates, cutlery, barbeques, wipes etc.) and a focus on convenience generally to match increasingly fast paced lifestyles. As the 90’s progressed more capacity was needed at the kerbside to deliver against the increased quantity and, in particular volume of household waste, and the 240 litre wheeled bin started gaining favour over the 70 - 90litre dustbin. Meanwhile the UK remained locked-in to a landfill led waste management approach, and some resource efficiency initiatives like deposit return schemes made way for lower cost of purchase.

Global environmental challenges were increasingly gaining momentum from the late 1980’s into the 1990’s focussing attention on major problems like acidification, ozone depletion and global warming. The rapid rise in consumption and disposal of goods was counter to the principal of sustainable living and posed a direct confrontation to major environmental problems. But changing habits is not easy or straightforward. The waste managers, after a 1995 National Waste Strategy, were charged with developing recycling plans to deliver a 25% recycling rate by 2000. Recycling officers and Agenda 21 officers were recruited to help execute measures and encourage householder to participate. But the Strategy lacked the teeth and the funding to adequately support Councils to make the investments in collection systems.

The new millennium turned, and the recycling rate had gone from c.5% in 1995 to c.10% in 2000. The resource recovery was insufficient and so a bigger stick and some better incentives were needed. They arrived in the form of an enhanced escalator for the Landfill Tax creating a substantial driver and a message to the market that it was here to stay (and only get stronger), a statutory requirement for Councils to reach higher recycling levels, some capital funds for bins and vehicles, and supporting schemes around strategy, landfill diversion, alternative treatment infrastructure and partnership development helped to collectively transform waste management into resource recovery systems. The waste manager became the resource manager.

Capacity available at the kerbside increased rapidly from the introduction of garden waste collections to new multi-material dry recycling systems in addition to the wheeled bins for residual waste. The recycling rate became the target and a semi functioning secondary materials market provided some support as did compensatory mechanisms like recycling credits. The resource manager via contracts or in-house services was responsible for composting, materials recycling and alternative residual waste treatment facilities as landfill tonnages fell year on year on year. An unprecedented period of change, boosted by increased public awareness. 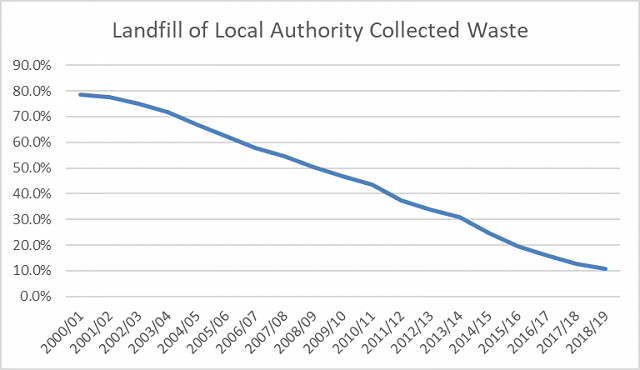 The push for diversion and to an extent recycling rates, are end of pipe solutions, they largely ignore the activities further up the chain and try and address the outcomes of the problem (waste) rather than the problem itself (raw material consumption, product design, overall degree of consumption and a lack of application of the polluter pays principle). To focus on the former is a far easier area for the Government to control, helps appease public unease at the heightening environmental issues and avoids the challenge of taking on producers, corporations and addressing unsustainable lifestyle practices. All of which are thorny stakeholders and potentially vote losers. But failure to tackle the root problem areas results in ubiquitous symptoms like increasing diversity of materials and wastes presented to the resource manager, that have low or no value for separation and destined for outlets that could not be described as sustainable markets.

As we move to the last decade and carbon gains greater recognition, the resource manager became the environmental manager, but major policy measures are inhibited by another market failure - the banking crisis, so limited progress is made except again to focus on end of pipe solutions by restricting residual waste capacity and curtail garden waste collections. These measures partly address the overzealous collection capacity proliferation of the early 2000’s, and in turn save money for the Council when times are lean. The new hope in this period was the rising concept of the circular economy, and some businesses taking the initiative and finding alternative paths to both reduce and avoid resource consumption.

Since the late 2010’s into the beginning of the 2020’s climate emergencies rang out across the land and the environmental manager also becomes the carbon manager, and finally central Government appears ready to grasp the nettle and address producers through taxation, producer responsibility legislation and consolidation of collection practices. Carbon is hailed as the King, but one who views his lands with suspicion, whilst the flag of consumerism coyly flutters overhead trying to pretend it isn’t wrapped in plastic.

The implementation and design of these welcome Government environmental measures will take shape over the next two years. There will be many blogs on this topic to come, but what of the role of the next generation of waste / resource / environmental / carbon manager?

We have been looking ahead to 2050, where net zero carbon is a reality.

In short, carbon no longer remains a driver. It barely incentivises recycling (the carbon benefit of recycling is minimal if our energy and fuel is predominantly renewable or low /zero carbon), it certainly doesn’t incentivise energy recovery operations from residual waste (even if carbon capture and storage is applied). There is no benefit in chemical recycling, in fact deriving a fuel from plastics is a poor carbon choice now and certainly would be even worse in a low carbon world. The need to avoid landfill of biodegradable waste remains, but otherwise the drivers become quite different.

The watchword in 2050 is once again the recovery of resources. With each revolution of the earth there are less of them available, and more people that want to use what is left. Mineral, vegetable and animal, it is the resources which will be the priority for the future ‘waste manager’ but this time they won’t be labouring in isolation. The supply chain at the start, middle and end will also be required to play their part. Then, as when the Country was under threat in the World Wars - providing a horrific insight into imminent resource constraints - it will be the resources, recovered into the form that are needed, that count. Counted in and counted out, as fuels, chemicals, nutrients, secondary materials or energy. Managed, separated and recovered to meet the needs of future society.

So is this future gazing unrealistic? I expect the waste manager in 1995 would not have predicted landfill rates falling from 85% to c.10% of MSW in 2019, or landfill tax, once at £7 / tonne, at now over £94 / tonne. If the mechanisms and imperatives are there, huge leaps are possible, and with each landing the importance of managing resources beneath our feet becomes more fundamental.

Frith Resource Management provide technical consultancy to local government, central government and the private sector in the UK and internationally. For resource management advice call us on 01746 552423, or email sarah@frithrm.com. More details on www.frithrm.com

More News Items
22 February 2021
What is the priority for the next generation of ‘waste managers’?
08 February 2021
FRM Agenda '21
01 February 2021
Designing Council waste services on a threatened planet (Part 1 - The power of defining services)